Poorest Countries of the World 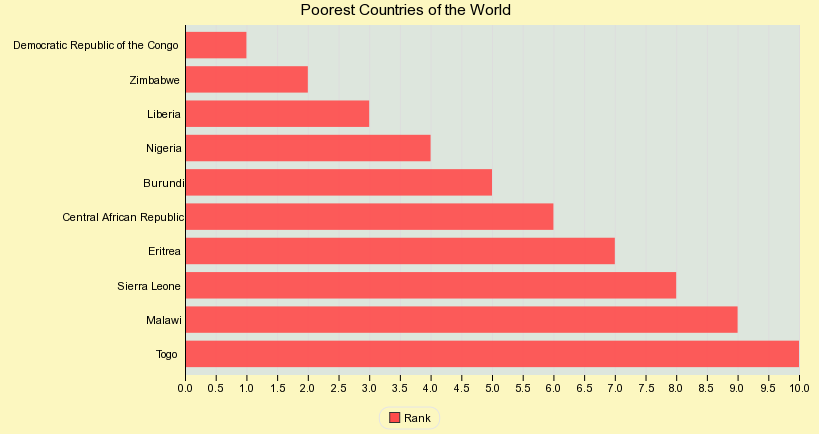 This chart shows Poorest Countries of the World.

Poverty is general scarcity or the state of one who lacks a certain amount of material possessions or money.It is a multifaceted concept, which includes social, economic, and political elements. Absolute poverty or destitution refers to the lack of means necessary to meet basic needs such as food, clothing and shelter.

Absolute poverty is meant to be about the same independent of location. Relative poverty occurs when people do not enjoy a certain minimum level of living standards as compared to the rest of society and so would vary from country to country, sometimes within the same country.

After the industrial revolution, mass production in factories made producing goods increasingly less expensive and more accessible. Of more importance is the modernization of agriculture, such as fertilizers, to provide enough yield to feed the population.

Providing basic needs can be restricted by constraints on government's ability to deliver services, such as corruption, tax avoidance, debt and loan conditionalities and by the brain drain of health care and educational professionals. Strategies of increasing income to make basic needs more affordable typically include welfare, economic freedoms and providing financial services.

Poverty reduction is a major goal and issue for many international organizations such as the United Nations and the World Bank.

World Bank: Poverty is pronounced deprivation in well-being, and comprises many dimensions. It includes low incomes and the inability to acquire the basic goods and services necessary for survival with dignity. Poverty also encompasses low levels of health and education, poor access to clean water and sanitation, inadequate physical security, lack of voice, and insufficient capacity and opportunity to better one’s life.

Percentage of Population Living in Poverty