The Cities with the Most Billionaires 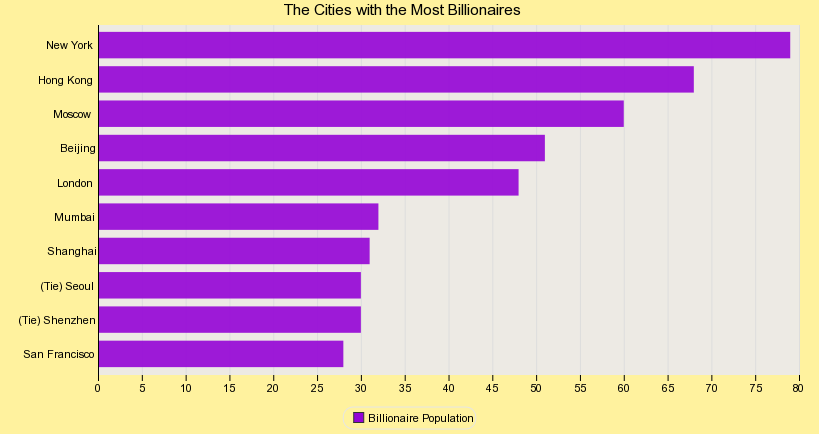 This chart shows The Cities with the Most Billionaires.

A billionaire, in countries that use the short scale number naming system, is a person with a net worth of at least one billion (1,000,000,000; a thousand million) units of a given currency, usually major currencies such as the United States dollar, the euro, or the pound sterling. The American business magazine Forbes produces a complete global list of known U.S. dollar billionaires every year, and updates an Internet version of this list in real time.

According to the Forbes report released , there are currently 1,826 U.S. dollar billionaires worldwide, from 66 countries, with a combined net worth of $7.05 trillion, which is more than the combined GDP of 152 countries.The majority of billionaires are male, but there are 197 female billionaires.

According to an Oxfam report, the wealth of the poorest 50% dropped by 41% between 2010 and 2015, despite an increase in the global population of 400 million. In the same period, the wealth of the richest 62 people between the World's Billionaires increased by $500bn to $1.76tn.

American Cities That Enjoy Sex the Most