Largest Landlocked Countries in the World 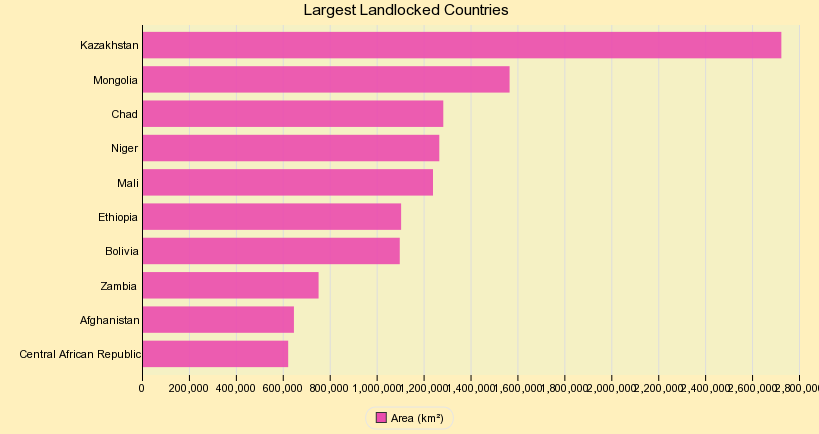 This chart shows Largest Landlocked Countries in the World.

A landlocked state or landlocked country is a sovereign state entirely enclosed by land, or whose only coastlines lie on closed seas. There are currently 49 such countries, including five partially recognised states. Only two, Bolivia and Paraguay in South America, lie outside Afro-Eurasia.

As a rule, being landlocked creates political and economic handicaps that access to the high seas avoids. For this reason, states large and small across history have striven to gain access to open waters, even at great expense in wealth, bloodshed, and political capital.

The economic disadvantages of being landlocked can be alleviated or aggravated depending on degree of development, language barriers, and other considerations. Some historically landlocked countries are quite affluent, such as Switzerland, Luxembourg, and Austria, all of which frequently employ neutrality to their political advantage. The majority, however, are classified as Landlocked Developing Countries.

9 of the 12 countries with the lowest Human Development Indices (HDI) are landlocked.Landlocked countries may be bordered by a single country having access to the high seas, two or more such countries, or be surrounded by another landlocked country.