Freedom of the Press Global Status 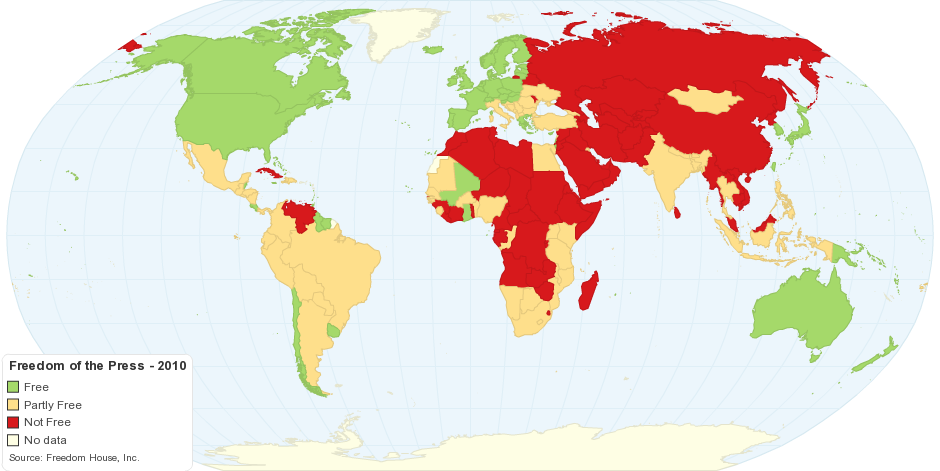 This map shows Freedom of the Press around the world.

What is Freedom of the Press?

They provides analytical reports and numerical ratings for 195 countries and territories, continues a process conducted since 1980 by Freedom House. The findings are widely used by governments, international organizations, academics, and the news media in many countries. Countries are given a total score from 0 (best) to 100 (worst) on the basis of a set of 23 methodology questions divided into three subcategories. Assigning numerical points allows for comparative analysis among the countries surveyed and facilitates an examination of trends over time. The degree to which each country permits the free flow of news and information determines the classification of its media as "Free", "Partly Free", or "Not Free". Countries scoring 0 to 30 are regarded as having "Free" media; 31 to 60, "Partly Free" media; and 61 to 100, "Not Free" media.

How is the Freedom of the Press calculated?

Their examination of the level of press freedom in each country currently comprises 23 methodology questions and 109 indicators divided into three broad categories:

The diverse nature of the methodology questions seeks to encompass the varied ways in which pressure can be placed upon the flow of information and the ability of print, broadcast, and internet-based media to operate freely and without fear of repercussions: In short, we seek to provide a picture of the entire "enabling environment" in which the media in each country operate. We also seek to assess the degree of news and information diversity available to the public in any given country, from either local or transnational sources.

For more information, please follow the reference link below.

Historical Freedom in the World, 1972 to Present