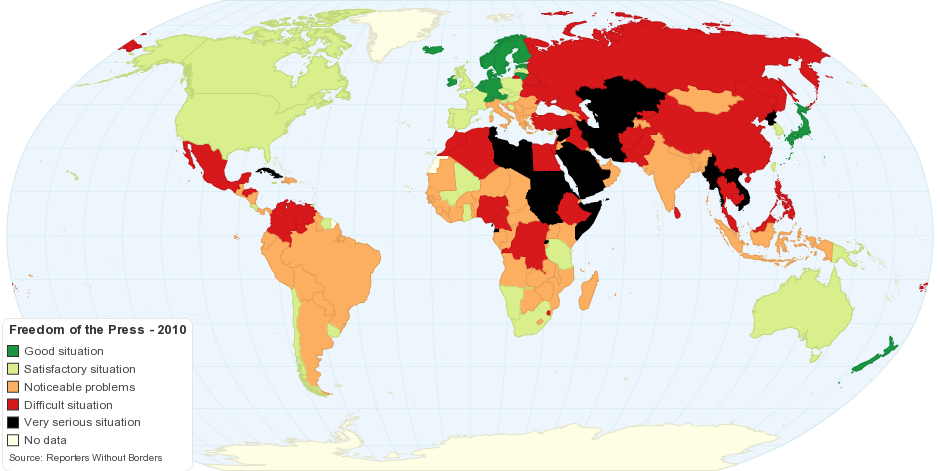 This chart shows Press Freedom Index, which ranks 178 countries around the world according to press freedom violations.

What is Press Freedom Index?

The Press Freedom Index is an annual ranking of countries compiled and published by Reporters Without Borders based upon the organization's assessment of their press freedom records. It reflects the degree of freedom journalists and news organisations enjoy in each country, and the efforts made by the state to respect and ensure respect for this freedom.

How is the Press Freedom Index calculated?

Reporters Without Borders compiled a questionnaire with 43 criteria for assessing the state of press freedom in each country. It includes every kind of violation directly affecting journalists (such as murders, imprisonment, physical attacks and threats) and news media (censorship, confiscation of issues, searches and harassment).

It registers the degree of impunity enjoyed by those responsible for such violations. It also takes account of the legal situation affecting the news media (such as penalties for press offences, the existence of a state monopoly in certain areas and the existence of a regulatory body) and the behaviour of the authorities towards the state-owned news media and the foreign press. It also takes account of the main obstacles to the free flow of information on the Internet.

The questionnaire was sent to partner organisations of Reporters Without Borders (14 freedom of expression groups in five continents) and its 130 correspondents around the world, as well as to journalists, researchers, jurists and human rights activists. A scale devised by the organisation was then used to give a country-score to each questionnaire. The Statistics Institute of the University of Paris provided assistance and advice in processing the data reliably and thoroughly.

Reporters Without Borders is careful to note that the index only deals with press freedom, and does not measure the quality of journalism. Due to the nature of the survey's methodology based on individual perceptions, there are often wide contrasts in a country's ranking from year to year.

Freedom of the Press Global Status

Number of Journalists in Prison Worldwide