Top Ten Countries with Most Strikes and Lockouts 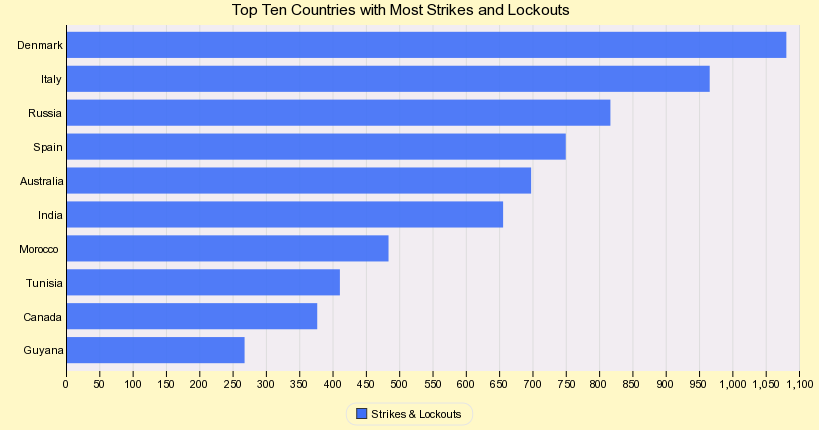 This chart shows Top Ten Countries With Most Strikes And Lockouts.

Strike action, also called labor strike, labour strike, or simply strike, is a work stoppage caused by the mass refusal of employees to work. A strike usually takes place in response to employee grievances. Strikes became common during the Industrial Revolution, when mass labor became important in factories and mines.

In most countries, strike actions were quickly made illegal, as factory owners had far more power than workers. Most Western countries partially legalized striking in the late 19th or early 20th centuries.

Strikes are sometimes used to pressure governments to change policies. Occasionally, strikes destabilize the rule of a particular political party or ruler; in such cases, strikes are often part of a broader social movement taking the form of a campaign of civil resistance.

A lockout is a temporary work stoppage or denial of employment initiated by the management of a company during a labor dispute.This is different from a strike, in which employees refuse to work. It is usually implemented by simply refusing to admit employees onto company premises, and may include actions such as changing locks and hiring security guards for the premises.

Other implementations include a fine for showing up, or a simple refusal of clocking-in on the time clock. It is therefore referred to as the antithesis of strike. A lockout is generally used to enforce terms of employment upon a group of employees during a dispute.

A lockout can act to force unionized workers to accept changed conditions such as lower wages. If the union is asking for higher wages, better benefits or to maintain their benefits, an employer may use the threat of a lockout or an actual lockout to convince the union to back down.