Largest Armies in the World 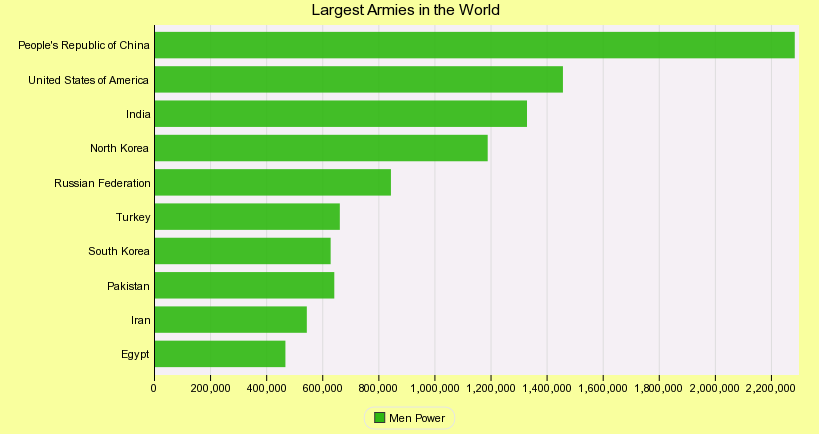 This chart shows Largest Armies in the World.

An army or ground force is a fighting force that fights primarily on land. In the broadest sense, it is the land-based military branch, service branch or armed service of a nation or state. It may also include other branches of the military such as the air force via means of aviation corps.

Within a national military force, the word army may also mean a field army. They differ from army reserves who are activated only during such times as war or natural disasters.

In several countries, the army is officially called the Land Army to differentiate it from an air force called the Air Army, notably France. In such countries, the word "army" on its own retains its connotation of a land force in common usage.

By convention, irregular military is understood in contrast to regular armies which grew slowly from personal bodyguards or elite militia. Regular in this case refers to standardized doctrines, uniforms, organizations, etc.

Regular military can also refer to full-time status, versus reserve or part-time personnel. Other distinctions may separate statutory forces , from de facto "non-statutory" forces such as some guerrilla and revolutionary armies.