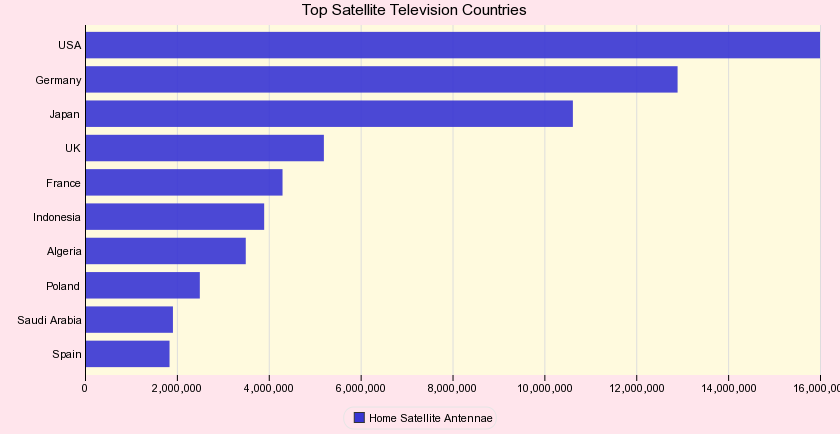 Satellite television is a service that delivers television programming to customers by relaying it from a communications satellite orbiting the Earth directly to the customer's location.The signals are received via an outdoor parabolic antenna usually referred to as a satellite dish and a low-noise block downconverter (LNB).

A satellite receiver then decodes the desired television programme for viewing on a television set. Receivers can be external set-top boxes, or a built-in television tuner. Satellite television provides a wide range of channels and services. It is the only television available in many remote geographic areas without terrestrial television or cable television service

.Modern systems are all direct-broadcast satellite television , also known as "direct to home" (DTH).In DBSTV systems, signals are relayed from a direct broadcast satellite on the Ku band frequencies requiring only a small dish less than a meter in diameter.

Early direct-broadcast satellite television systems used analog signals, but modern ones use digital signals which allow transmission of the modern television standard, high-definition television . Different receivers are required for the two types. Satellites used for television signals are generally in either naturally highly elliptical (with inclination of +/−63.4 degrees and orbital period of about twelve hours, also known as Molniya orbit) or geostationary orbit 37,000 km above the earth's equator.

There are three primary types of satellite television usage: reception direct by the viewer, reception by local television affiliates, or reception by headends for distribution across terrestrial cable systems.Direct to the viewer reception includes direct broadcast satellite  and television receive-only , both used for homes and businesses including hotels, among other properties.

Satellite of Countries As of Present 2017

Countries with Most Number of Internet Users