Highest Waterfalls in the World 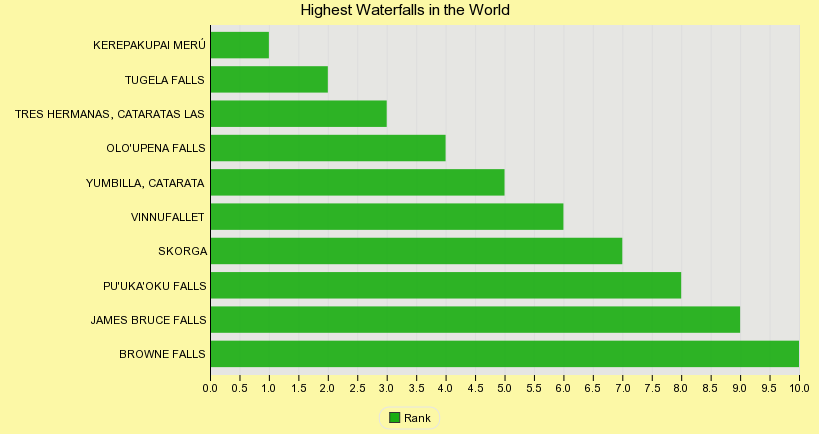 This chart shows Highest Waterfalls in the World.

A waterfall is a place where water flows over a vertical drop or a series of drops in the course of a stream or river. Waterfalls also occur where meltwater drops over the edge of a tabular iceberg or ice shelf. Waterfalls are commonly formed in the upper course of the river.At these times the channel is often narrow and deep.

A river sometimes flows over a large step in the rocks that may have been formed by a fault line. Waterfalls can occur along the edge of a glacial trough, where a stream or river flowing into a glacier continues to flow into a valley after the glacier has receded or melted. The large waterfalls in Yosemite Valley are examples of this phenomenon, which is referred to as a hanging valley. Another reason hanging valleys may form is where two rivers join and one is flowing faster than the other.

Waterfalls normally form in a rocky area due to erosion. After a long period of being fully formed, the water falling off the ledge will retreat, causing a horizontal pit parallel to the waterfall wall.

Eventually, as the pit grows deeper, the waterfall collapses to be replaced by a steeply sloping stretch of river bed.In addition to gradual processes such as erosion, earth movement caused by earthquakes or landslides or volcanoes can cause a differential in land heights which interfere with the natural course of a water flow, and result in waterfalls.