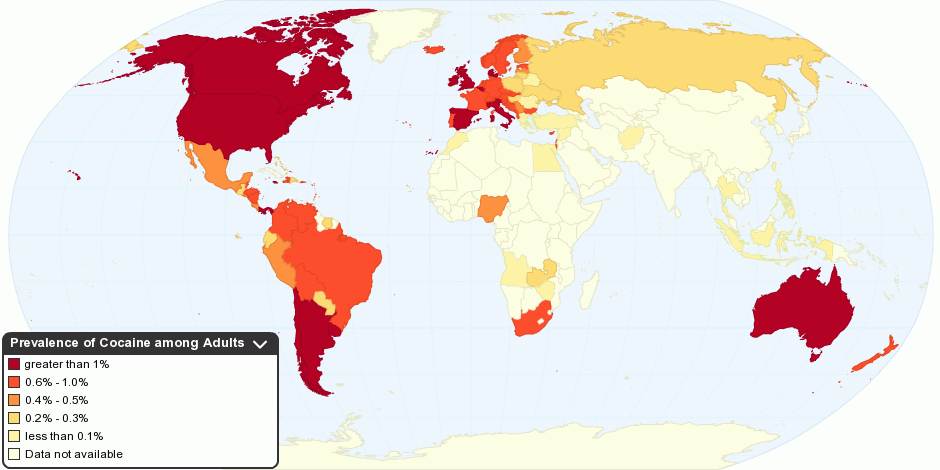 Cocaine has been a popular recreational drug for decades, and while demand appears to be on the wane in its largest markets, it has gained popularity in an ever widening range of countries. 'Cocaine' comprises at least two distinct drug products: powder cocaine on the one hand, and a range of cocaine base products, mostly falling under the heading of 'crack', on the other. Powder cocaine produces a more subtle effect, is more expensive to use, and has become emblematic of economic success in some circles. Demand has emerged in many developing countries, particularly among elites. Crack is cheaper, more intense, and associated with prostitution and street crime. Traditionally, crack use was rare outside the United States of America and the United Kingdom, but this also appears to be changing, especially in Latin America and parts of Africa.

According to United Nations Office on Drugs and Crime (UNODC) the new estimates – like those reported for previous years - suggest that the largest market is still North America, followed by West and Central Europe and South America. Compared to previous year, the range shifted to lower levels, suggesting a decrease in the global number of cocaine users. This change is due to the decrease in the number of cocaine users in North America. In addition, missing data and/or absence of recent reliable estimates affect many regions, particularly East Africa, Central Asia, the Near and Middle East and South Asia.

For more information please follow the reference link below.

Rate of Drug Abuse in the world